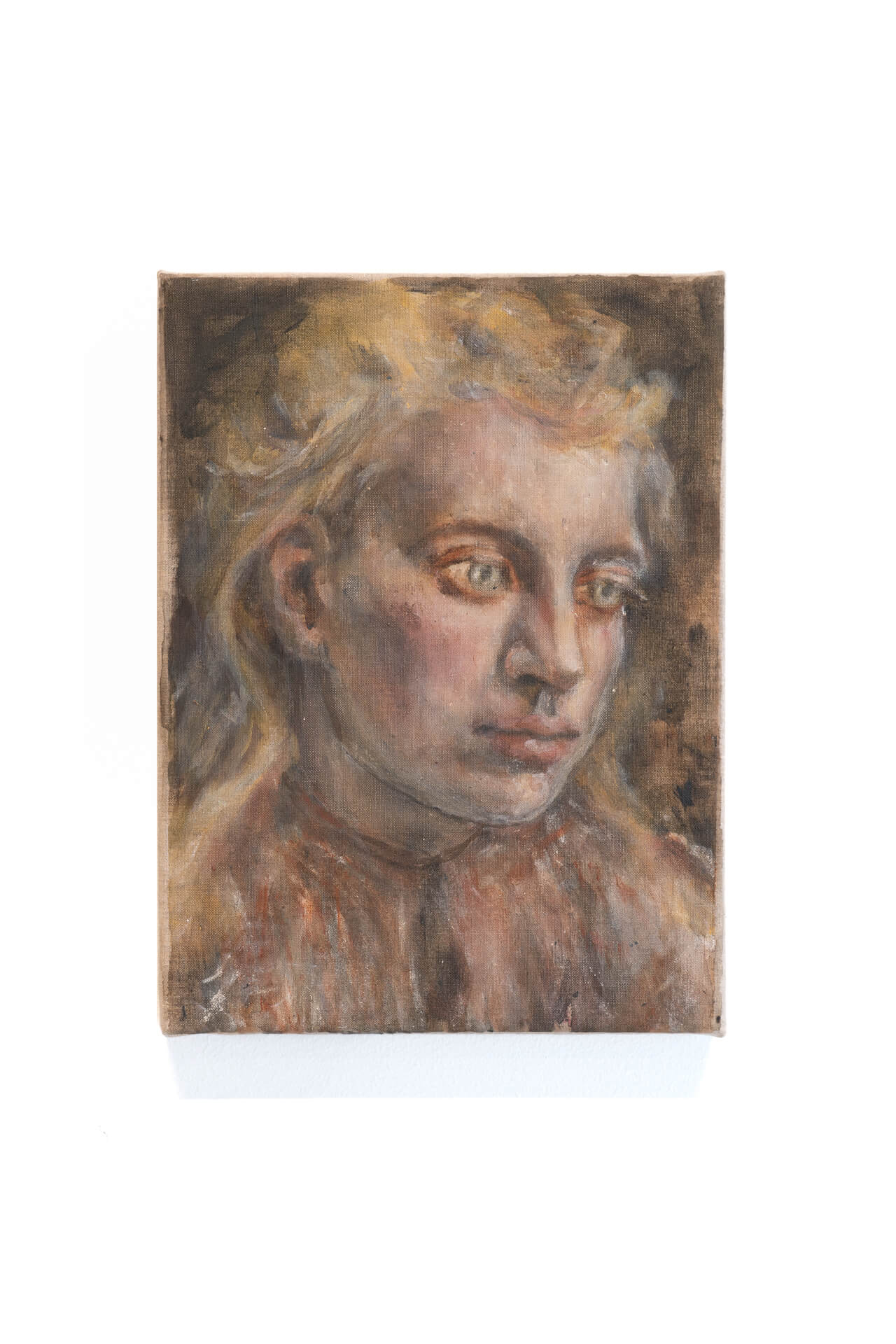 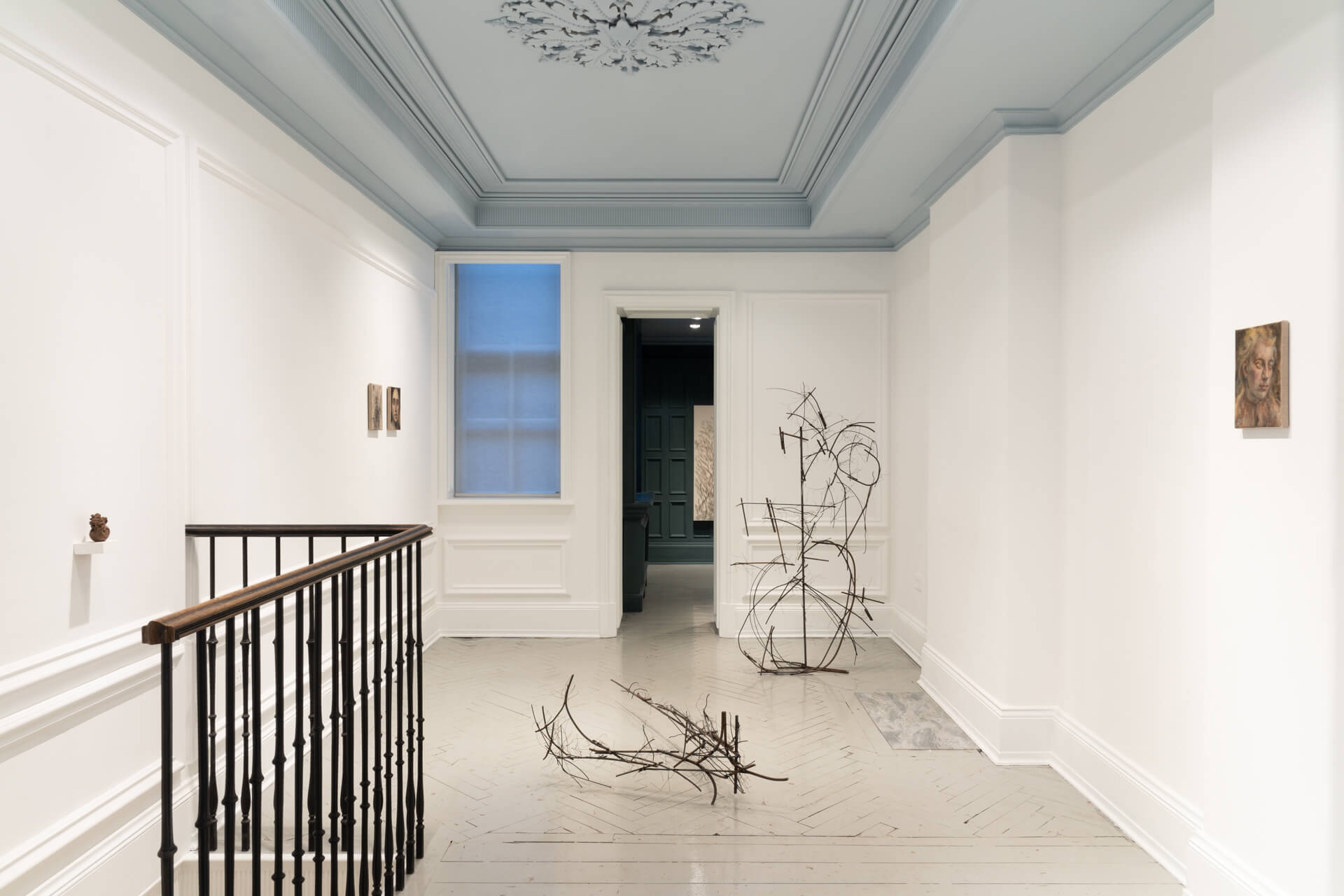 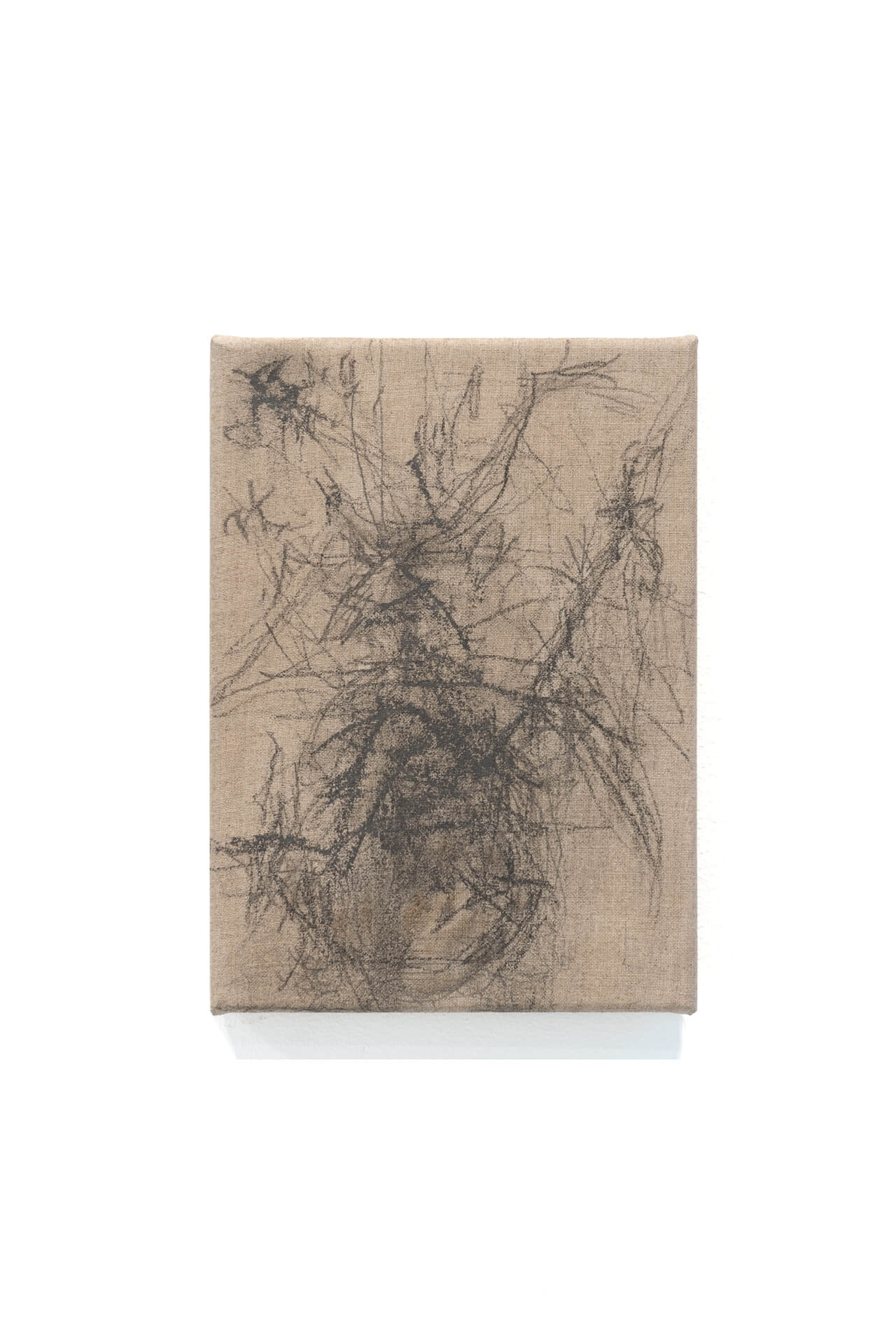 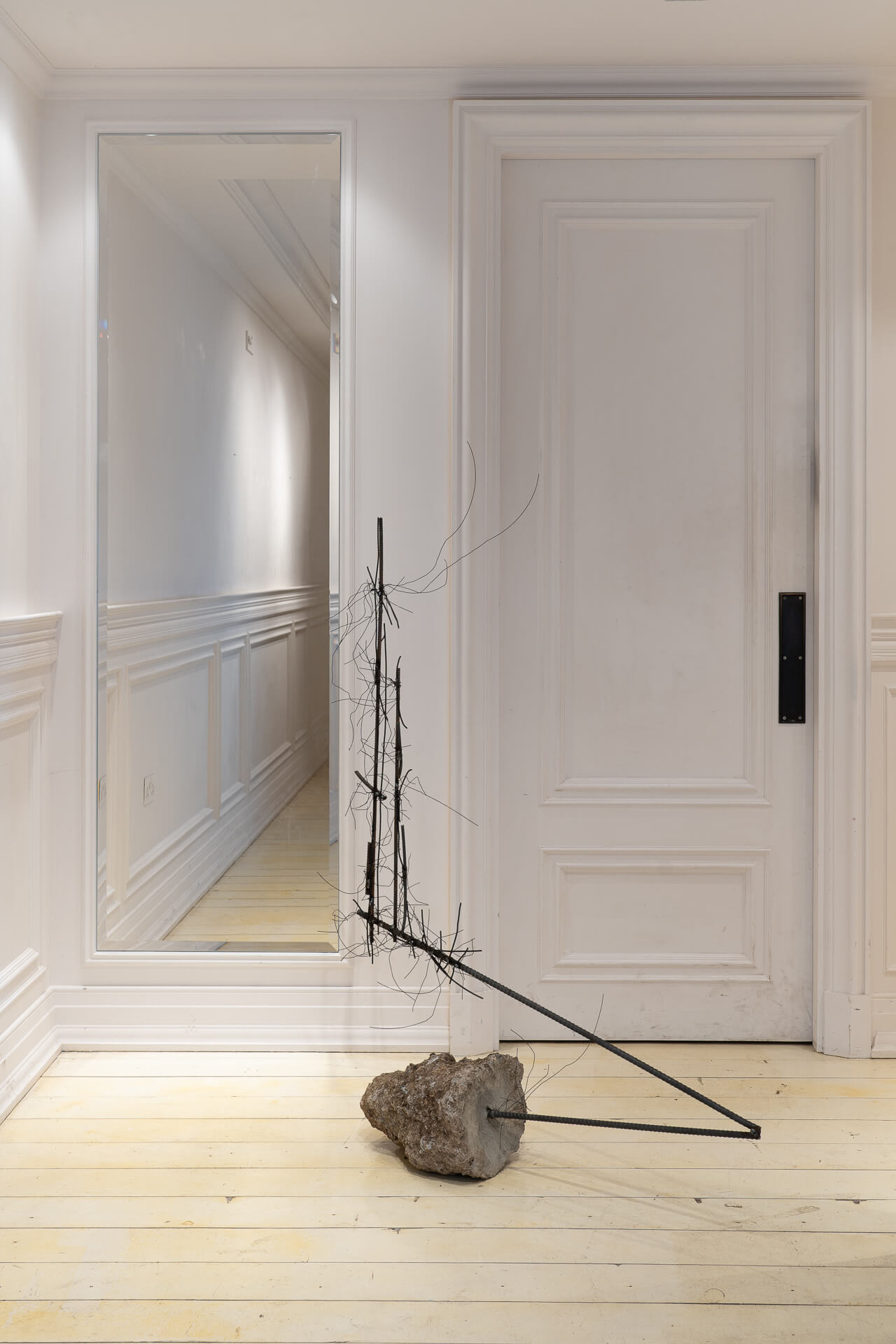 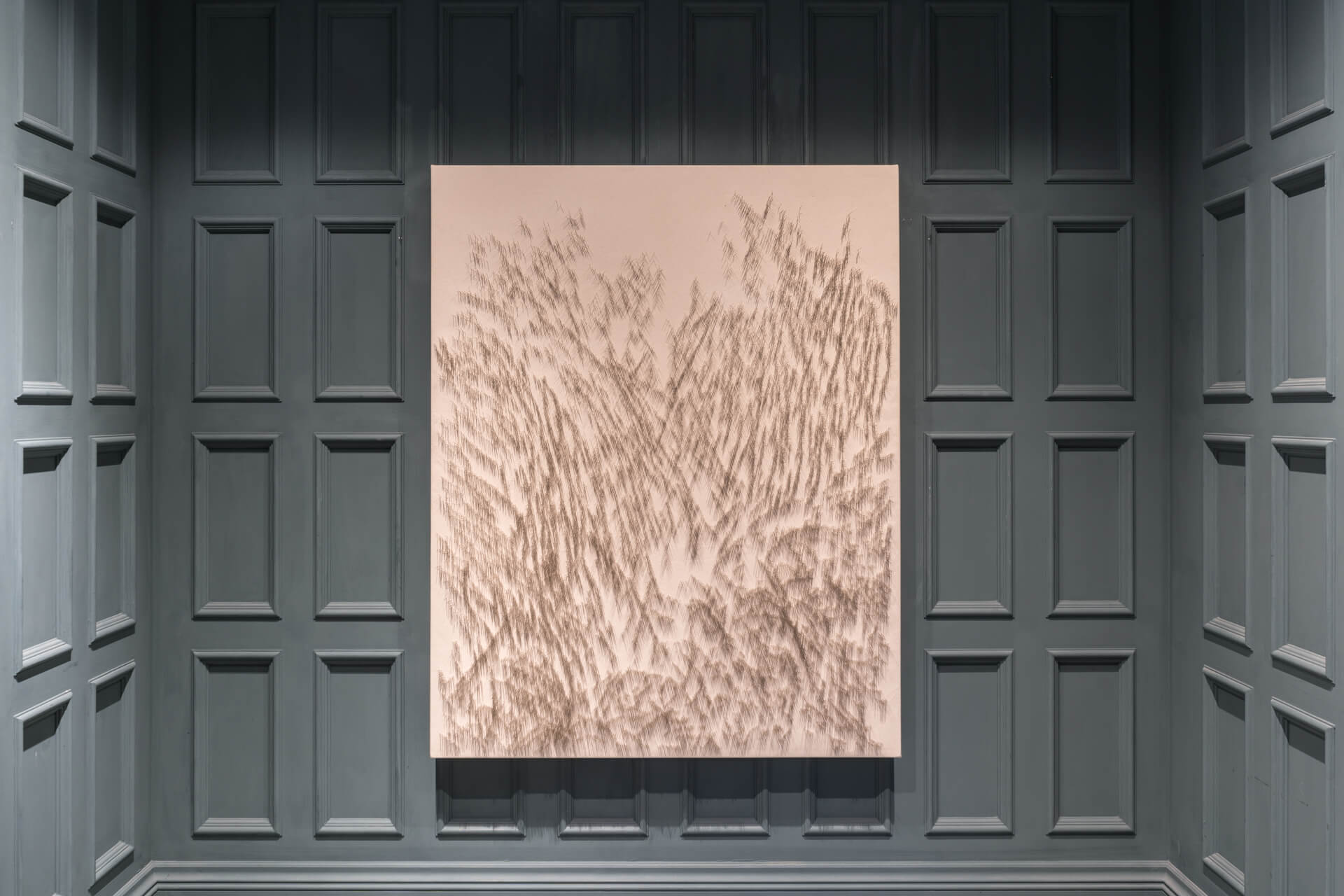 Hägglund’s practice is concerned with language, or rather, the lack of it. In the attempt to silence words and render language mute, Hägglund draws us closer to the physical experience through her employment of metal, paint, concrete, canvas, clay and graphite. She describes her work as “making all the lines come together”, so that what once was representation – symbols, images, letters – becomes material.

Understanding language as merely a substitute for the real, Hägglund attempts to shatter the human desire for semantics and, instead, allows for an encounter with the world through material, abstract experience. In her own words:

“I discovered that I cannot say an object, I can only speak around it. Both as a teenager and later in my twenties I lived between, and in and out of several countries, continents, cultures and languages. In fact I still do. Moving around, existing, and breathing different modalities of how the world is implied through language.”

‍At One With The World showcases Hägglund’s most ambitious body of work to date. Sharp, unfurling metal sculptures become a kind of ‘lingua franca’, an alphabet in space; an excavated hole of cement, the positive space of the earth, rests heavily above-ground as thin, angular rods of corrugated steel shoot out of it. These sculptural forms sometimes find their counterparts in a tangle of untamable graphite lines on canvas and, in both, the undefined is manifest.

Hägglund also presents two portraits, both acrylic on canvas, which at first seem at odds with the surrounding abstraction; in each of these, generic female faces are titled singularly ‘Without Name’ and ‘No Name’. These representational portraits become, for Hägglund, a further locus for anonymous obfuscation. Identities are lost just as meaning seems to re-appear. Hägglund’s preoccupations extend to the body, in particular, the mouth, being the site that mediates language, a place where we hold our ‘mother tongue’. ‘Unburied Voice’ is the hardened clay cast from the inside of the artist’s mouth as she pronounces a word, the muscles cry a silent scream. The palimpsest is complete. Held in this experience of knowing and not-knowing, we lose our sense of direction and are swept into Hägglund’s world.

Evelina Hägglund lives and works in London and Stockholm. After completing her bachelor degree at the Academy of Visual Arts in Ljubljana in 2018, she graduated the MFA programme at Goldsmiths in London in 2021. Her work has been shown in solo and group exhibitions internationally, including at Green Family Foundation (2022), Nicoletti Contemporary (2022), Union Pacific (2021), Saatchi Gallery (2021), Inter Pblc, Copenhagen (2021), Jakobsbergs konsthall Stockholm (2020) and Kiribati National Museum, Tarawa, KI (2019). This exhibition at Incubator 22 has been supported by The Swedish Arts Grants Committee.